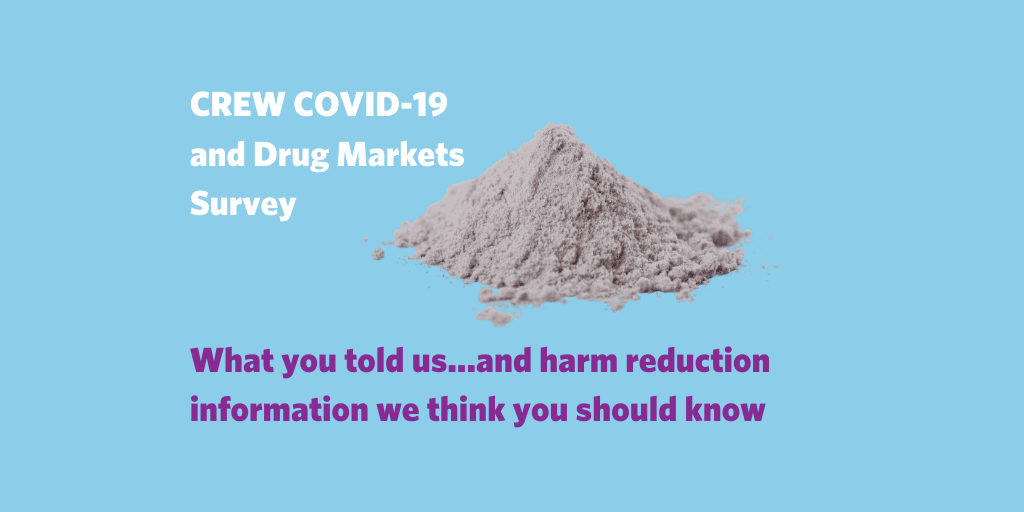 We’ve put together a summary report for the second month of our COVID-19 and Drug Markets Survey. The report aims to share our insights into the impact of COVID-19 and it includes some of the essential harm reduction responses that people who take drugs should be aware of. You can download the second monthly report here and you can find the summary of the first month here.

Thank you to everyone who took part in the survey. We will be leaving the survey open throughout June and you can respond here. We welcome any updates and new observations.

This report summarises 50 responses received between 29 April and 31 May 2020. The survey was open to responses from anywhere in the world, however 68% were from people in the UK. The survey was open to people who take drugs and people who were responding as a worker from a drug-related service or more generally about someone else’s drug use. During the period covered in the report 81% of the respondents were completing the survey about themselves.

When we asked about changes to the supply of drugs since the outbreak of COVID-19 in Europe, 63% of respondents reported that they had noticed an impact on the way that drugs were bought, sold and taken. 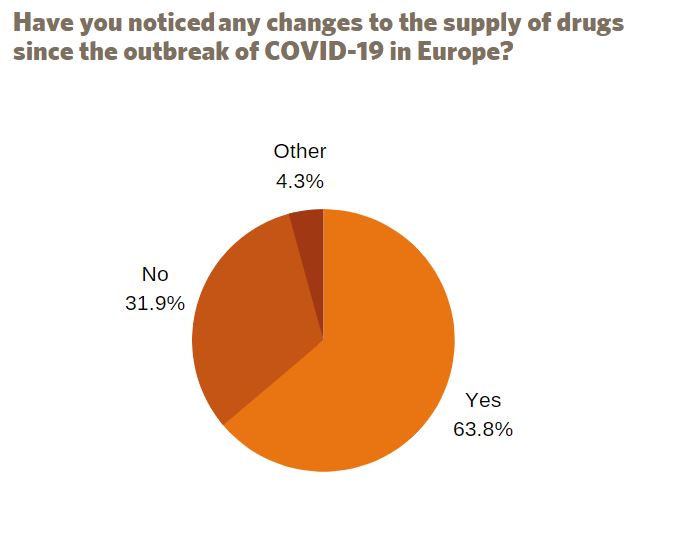 When exploring what kind of changes had occurred, 92% of our respondents reported that the biggest impact was observed in the ‘face to face’ market. In this reporting period, 8% of the respondents indicated that they were using social media or other online drugs markets more now, than they were before the global outbreak. This is in comparison to 30% of respondents during the first month of the survey.

The biggest changes were reported to affect cannabis, cocaine and alcohol. The percentage of people reporting benzodiazepine use decreased from 26% in April to 11% in May. This may partly be because almost all Scottish services reported the use of benzos and the number of reports from services fell from 25% in April to 15% in May.

I’ve found the lockdown really hard on my mental health and my way of dealing with things is using drugs so obviously my use has massively increased so I’m praying the lockdown can end as soon as possible so I can go back to my usual daily routine (pre pandemic). 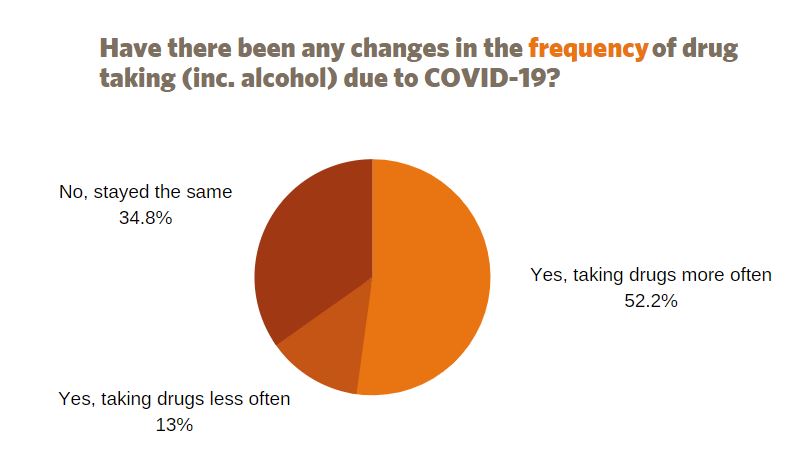 The same percentage of people (52%) also indicated that they were taking a larger amount of drugs than they usually would have. During this reporting period, there was an increase in the number of people indicating one of the reasons that they were taking larger amounts was due to them not getting the same effect as before. This may be due to the person developing an increased tolerance to the drug or it may be due to the drugs available being of poorer quality. There is no national opportunity for drug checking so we do not have quantitative insights into fluctuations in the quality of drugs, however 28% of respondents indicated that they perceived a drop in the quality of the products that were available. 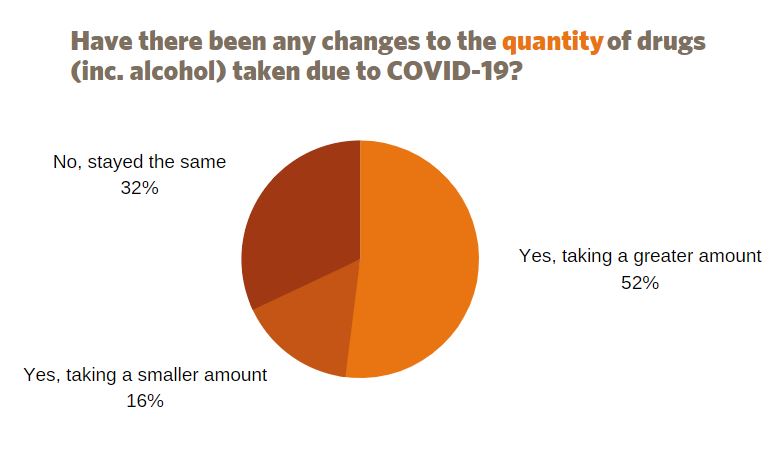 Around half (52%) of our survey respondents reported spending more money on drugs than they would usually and more than half (57%) reported stockpiling. Our concerns here are around people getting into debt by spending more than they can afford; and people using up their supply more quickly due to having larger quantities of drugs in the house.

There was an increase in the number of respondents who reported product shortages (69%) in comparison to month one (56%) and almost half of the respondents noticed that it was taking longer to get stock (45%). Other changes included price increases (38%) and less variety of products being available (31%).

30% of people are taking different types of drugs to usual. Reasons for this include a change in circumstances, closure of nightlife settings and because they are not able to source the same drugs as usual.

Half of the respondents (50%) reported feelings of worry or anxiety related to the impact of COVID-19 on the way drugs are bought, sold and taken.

When we asked about difficulties in accessing support, 67% of the respondents indicated they had difficulty in getting support relating to drug use. We have recently worked with NHS Scotland to develop information for the NHS Inform website around drug use and COVID-19, including up to date information about how to access services.

Please be aware that Crew counselling services are still operational with distance counselling taking place by phone or video call and our Drop-in has gone digital. Find out more about COVID-19 and drugs here. 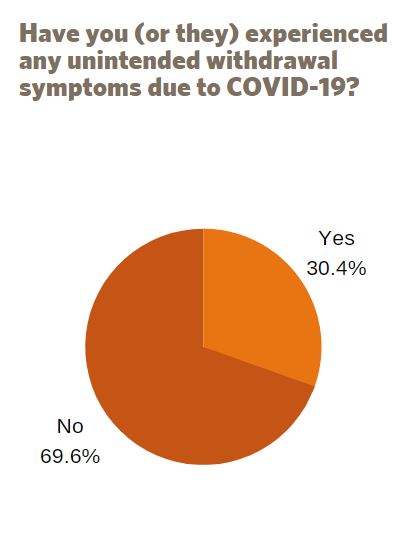 The second month of our survey results highlight similar themes to previous reports. Many people are taking larger quantities of drugs, taking them more frequently and spending more money. This, combined with a decrease in the accessibility or availability of drug-related support and changes to the drug market including poorer quality drugs, mean there is likely to be an increase in drug-related harm as a result of COVID-19.

We have included key harm reduction messages that we think are essential for people who take drugs to think about, in light of the pandemic-induced changes to the way drugs and bought, sold and taken. 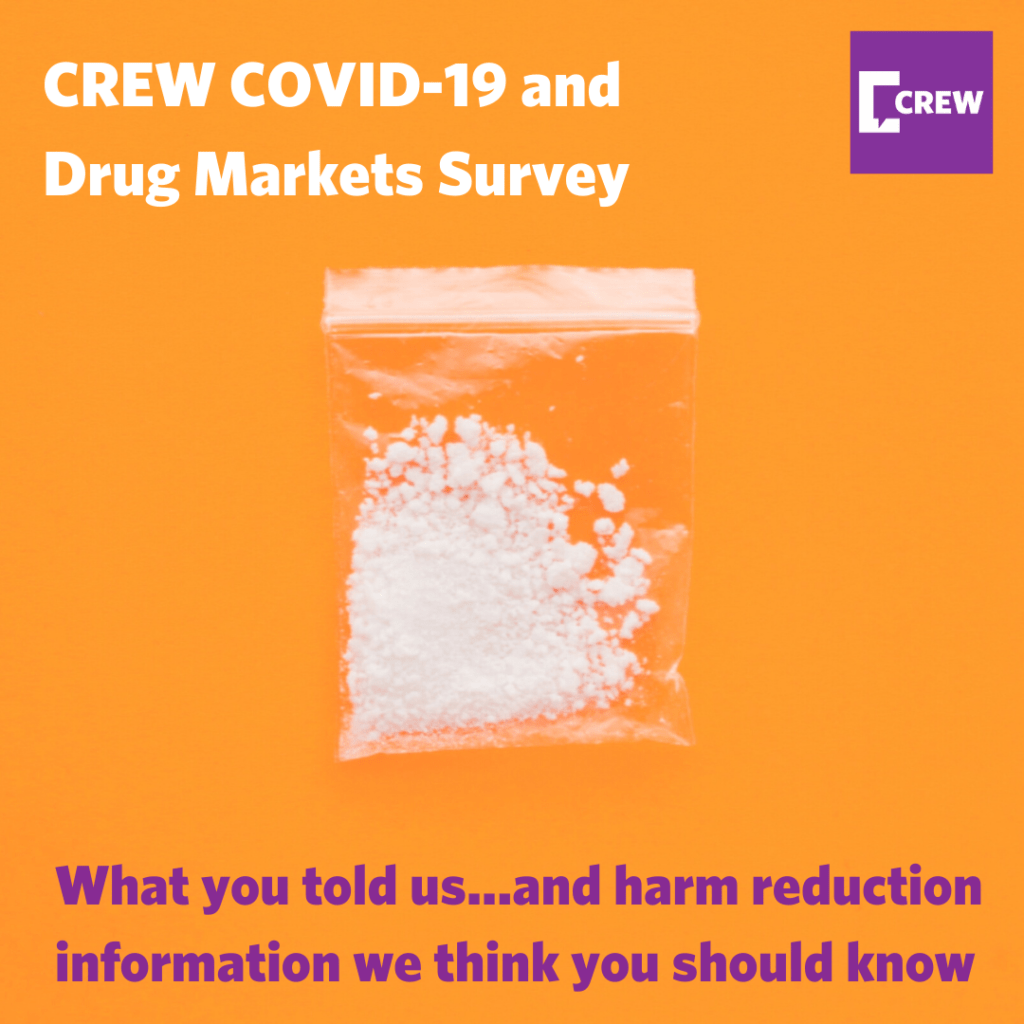