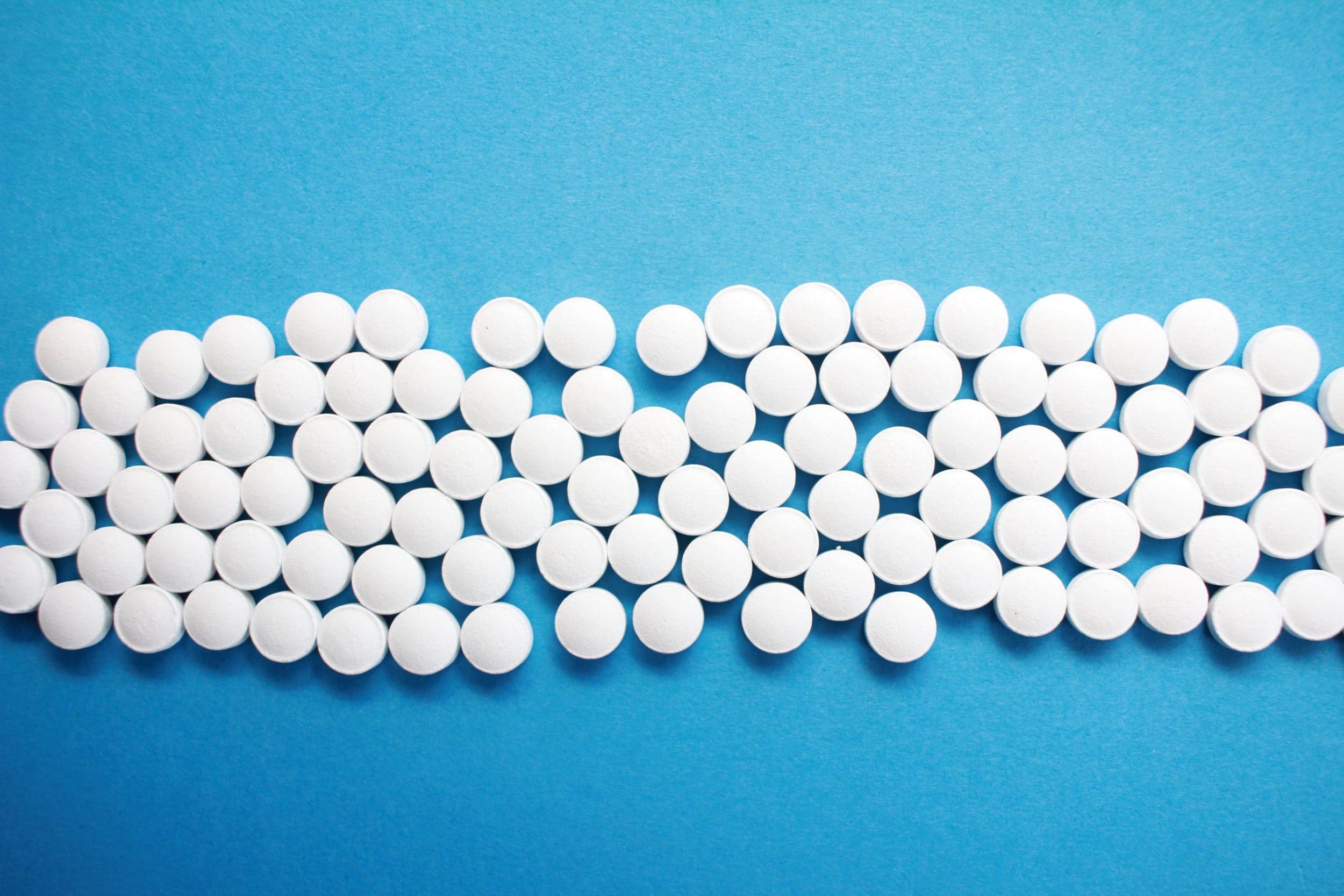 It has now been two weeks since we launched our survey exploring the impact of COVID-19 on the way drugs are bought, sold and taken.

It has also been 23 days since the UK government introduced measures that are described as ‘lockdown’ and a number of weeks since similar measures have been introduced in other countries.

This week we have had responses to the survey from Scotland, Brazil, Algeria, India, Greece and the United States of America. Responses from Scotland have spanned the country from Dumfries to Wick and Oban to Falkirk.

You can find a summary of the results from week two as a downloadable PDF here: Drug Market Survey Summary – Week 2. Not taken part in the survey yet?

So what have you told us?

In comparison to week one where only 54% of the respondents had noticed changes to the drug market, 65% of people filling in the survey now report changes. 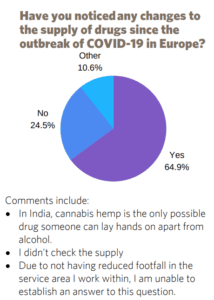 The top drugs that people were observing changes to included benzodiazepines, cannabis, cocaine and alcohol. All categories of drugs listed in our survey are reported to be affected in some way. 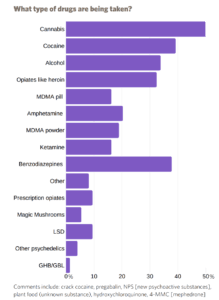 Most people (47%) are taking the same drugs that they would usually take while one third (36%) are taking drugs that they normally wouldn’t. The main drug people report that is not usual for them to take is alcohol while some respondents also report returning to smoking cannabis after not doing so for a period of time. For some people, a change in the way they buy drugs (moving from face to face to online), is leading to them taking new drugs due to increased variety.

The most common changes that people have reported are shortages of products (63%) and a decrease in quality (40%). It is also taking longer to get stock for some people (35%), price increases are commonly being reported (38%) and less variety of products (33%). People are also reporting more police checks and the availability of products varying across drug markets.

Dealers in my area have stopped selling altogether

The majority of people who responded to our survey (54%) are taking drugs more frequently than they usually would. Increases are reported as being due to, people having a lack of commitment to do anything else; the fact that they are drinking alcohol more frequently and this is leading to taking other drugs more often too; or the fact they are working from home so they can smoke cannabis more easily during the day.

I am following social distancing and not seeing my friends, so there is no reason for me to take those drugs at the moment.

Half of the survey respondents (50%) report that they are also taking a higher quantity of the drugs when they do take them. People are reporting that the biggest change is in alcohol consumption with people drinking greater amounts in an attempt to deal with feelings of anxiety. Some people are taking more drugs because they are no longer being drug tested and others because they are experiencing boredom. People who reported taking less noted that this was related to general anxiety around COVID-19 or only being able to buy drugs in smaller deals.

Feel like you are taking more than planned? Try our ‘Check it out‘ tool to do a self assessment of your drug use.

The majority of people who responded to the survey (58%) also reported feeling anxiety or worry about the impact COVID-19 was having on the way drugs are bought, sold or taken. These worries included having to travel further to access drugs, greater attention from the police, or the increased risk of overdoses. Other concerns include worries about availability, withdrawal and a lack of access to usual support systems. 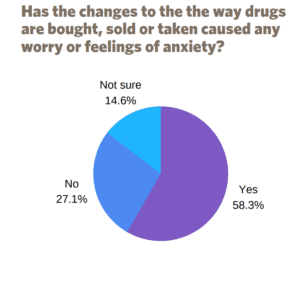 If you are affected by violence or abuse at home please know that there are services to support you including ones specifically designed for women and non-binary people, men, LGBT+ people and services for women within ethnic minority groups.

Around one third (31%) of people report trouble accessing prescriptions which is mainly due to changes in operating hours of the pharmacy or issues for people who are trying to self-isolate.

There were some reports of people stockpiling drugs (41%) due to fears of shortages while other respondents were not able to do so due to a lack of money to buy in bulk.

While many services have changed the way they operate and opening times, only 37% of people have reported issues in accessing support. For some people challenges include face to face meetings being moved online and not feeling that they can trust the online meetings or not having access to the internet. 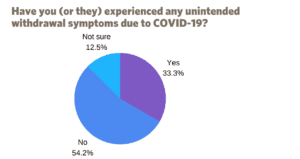 Keep an eye on our website and social media for new posts about harm reduction strategies for alcohol and other drug use during this period of lockdown and social distancing. If you are affected by any of the topics presented above please have a look at our COVID-19 harm reduction information and our updated page on services and support.

You can find our summary of the results from last week on our website here: Drug Market Summary – Week 1.