What is a drug-related death?

A drug-related death is generally a poisoning caused by the toxic effects of a controlled drug. Not every death related to the use of drugs is counted as a ‘drug-related death’ and the definition is not straightforward.

“The ‘baseline’ definition for the UK Drugs Strategy covers the following cause of death categories (the relevant codes from the International Statistical Classification of Diseases and Related Health Problems, Tenth Revision [ICD10], are given in brackets):

a) deaths where the underlying cause of death has been coded to the following sub-categories of ‘mental and behavioural disorders due to psychoactive substance use’:

b) deaths coded to the following categories and where a drug listed under the Misuse of Drugs Act (1971) was known to be present in the body at the time of death (even if the pathologist did not consider the drug to have had any direct contribution to the death):

Deaths which are not counted by the ‘baseline’ definition include deaths from:

The number of drug-related deaths in Scotland has been rising year on year since 2014 and have reached the highest level since records began. Scotland has the highest drug-related death rate in Europe and is approximately 3.5 times that of the rest of the UK (England, Wales and Northern Ireland). 2020 data for England and Wales is due to be published by the Office of National Statistics on 03 August 2021.

This graph uses data from the European Monitoring Centre for Drugs and Drug Addiction (EMCDDA) to illustrate the rate of ‘drug-induced’ deaths aged 15-64: per million people in Europe, with Scotland’s death rate of 327 (people per million) shamefully towering over the EU average of 14. In this graph the statistics for Great Britain rather than the whole of the UK are illustrated. 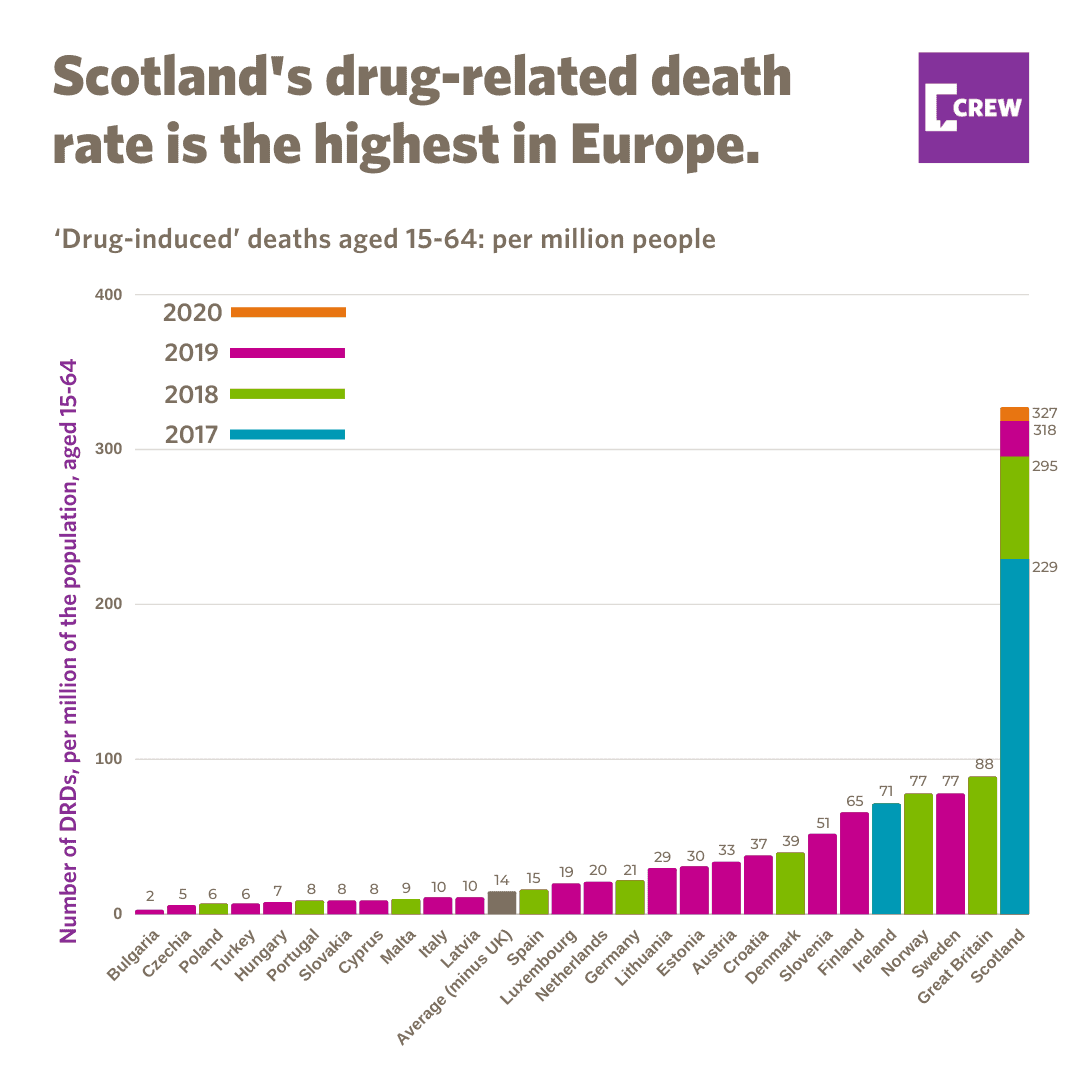 We can see from the graph below produced by the National Records of Scotland that there has been a sharp rise in drug-related deaths, most notably between 2014 and 2020 where the rate has doubled (an increase of 118% from 613 to 1,339). 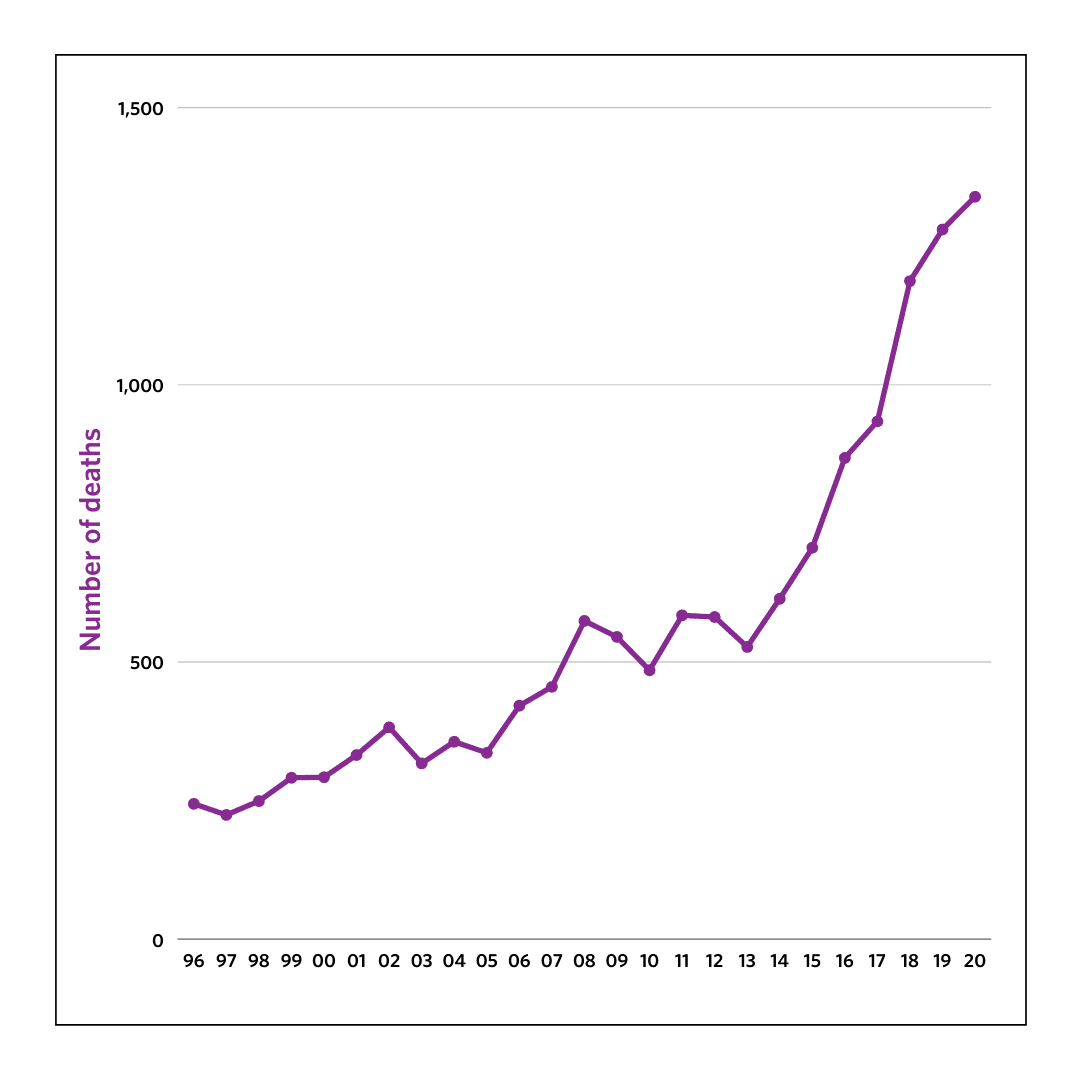 2020’s report shows the highest drug related-deaths in Scotland since records began in 1996 when 244 deaths were recorded. Polydrug use (the use of more than one drug at a time) is a major risk factor in drug deaths. The (mode) average number of drugs implicated in a death is 3, and ranges between 1 and 11. 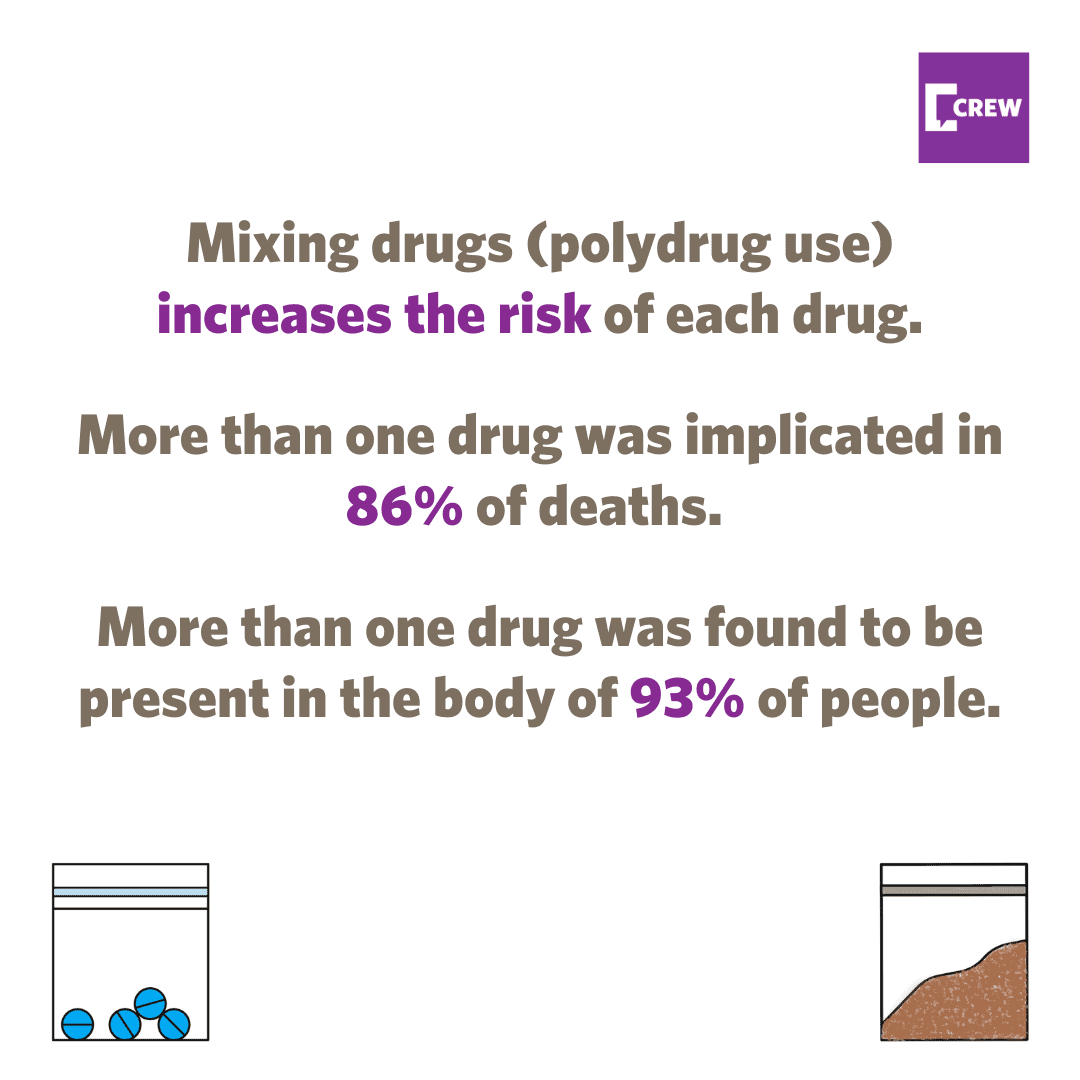 We can see that the use of opioid and benzo-type drugs are the driving factor behind the high drug-related death rate but there has also been a significant recent increase in the number of deaths where cocaine and/or gabapentinoids were implicated. 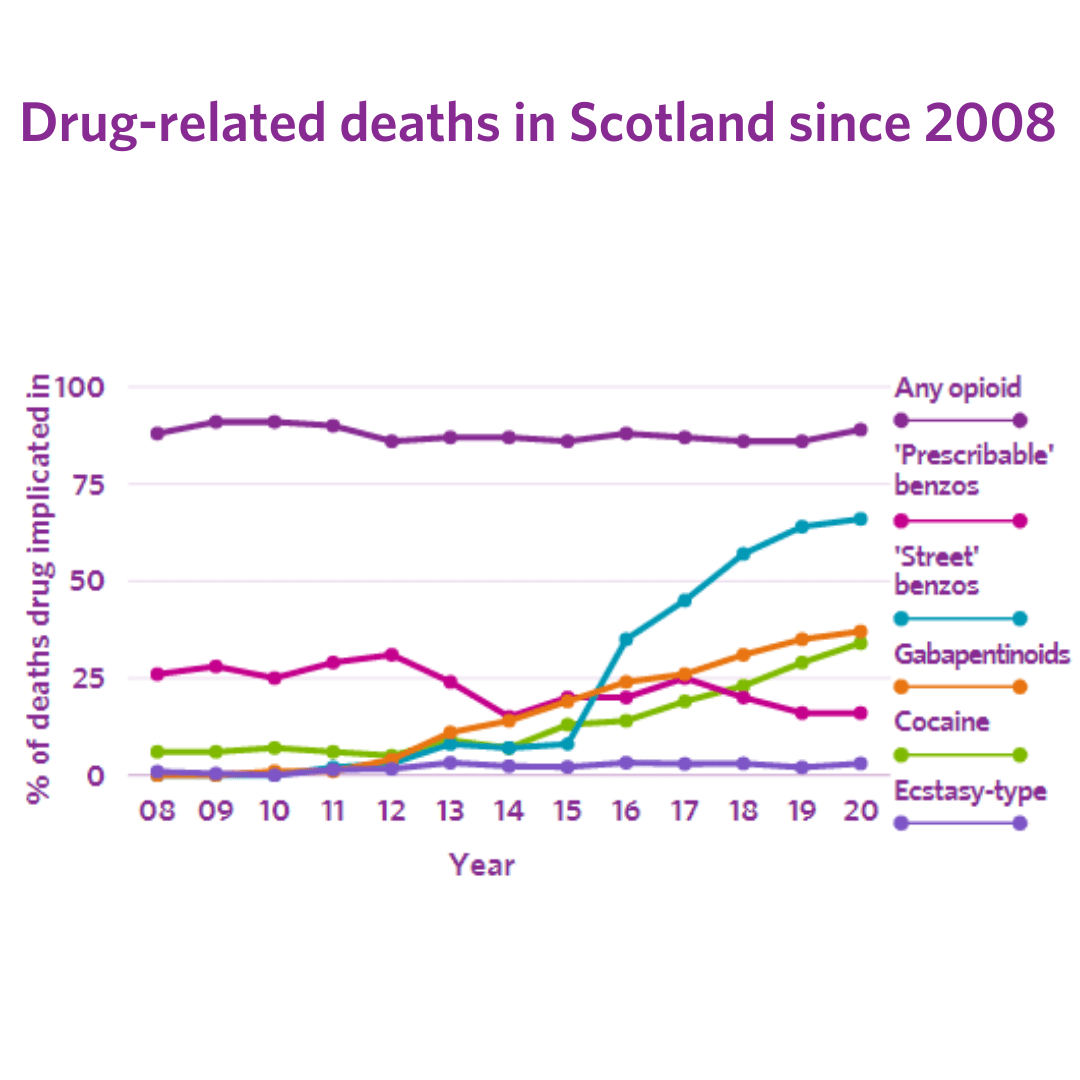 What drugs are featured in the deaths? 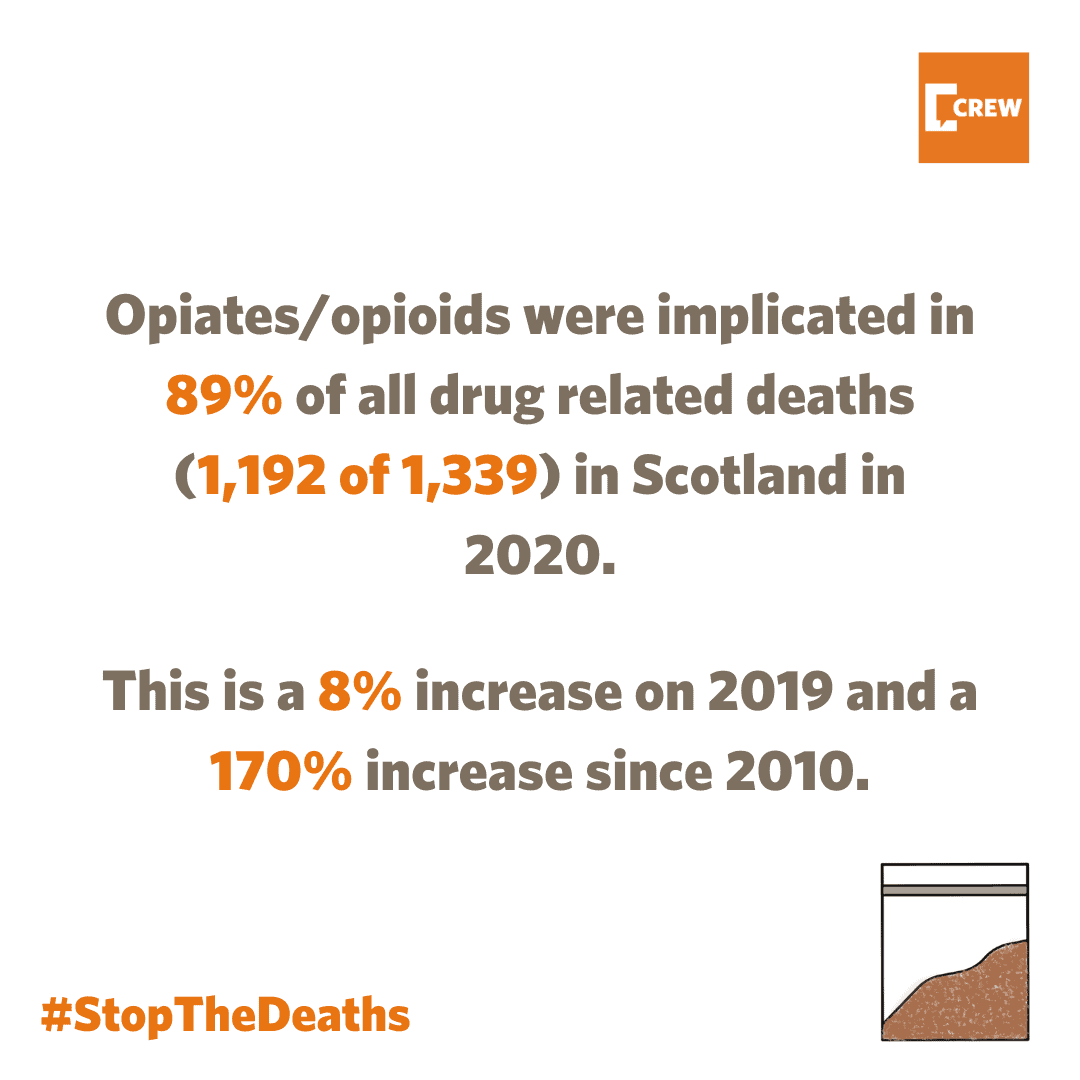 Opioids are implicated in 89% of all deaths. This is why it is essential that anyone who takes opioid drugs such as heroin, methadone, codeine or tramadol (or anyone who knows someone who does), should carry naloxone. Naloxone is a life-saving medication that can reverse the effects of an opioid overdose. Watch the video below from the Scottish Drugs Forum to find out more about how naloxone works.

Find out more about administering naloxone and what to do in an emergency.

Naloxone is free and anyone over the age of 16 can grab a naloxone kit from the Crew Drop-in, or order a postal kit from Scottish Families Affected by Alcohol and Drugs. 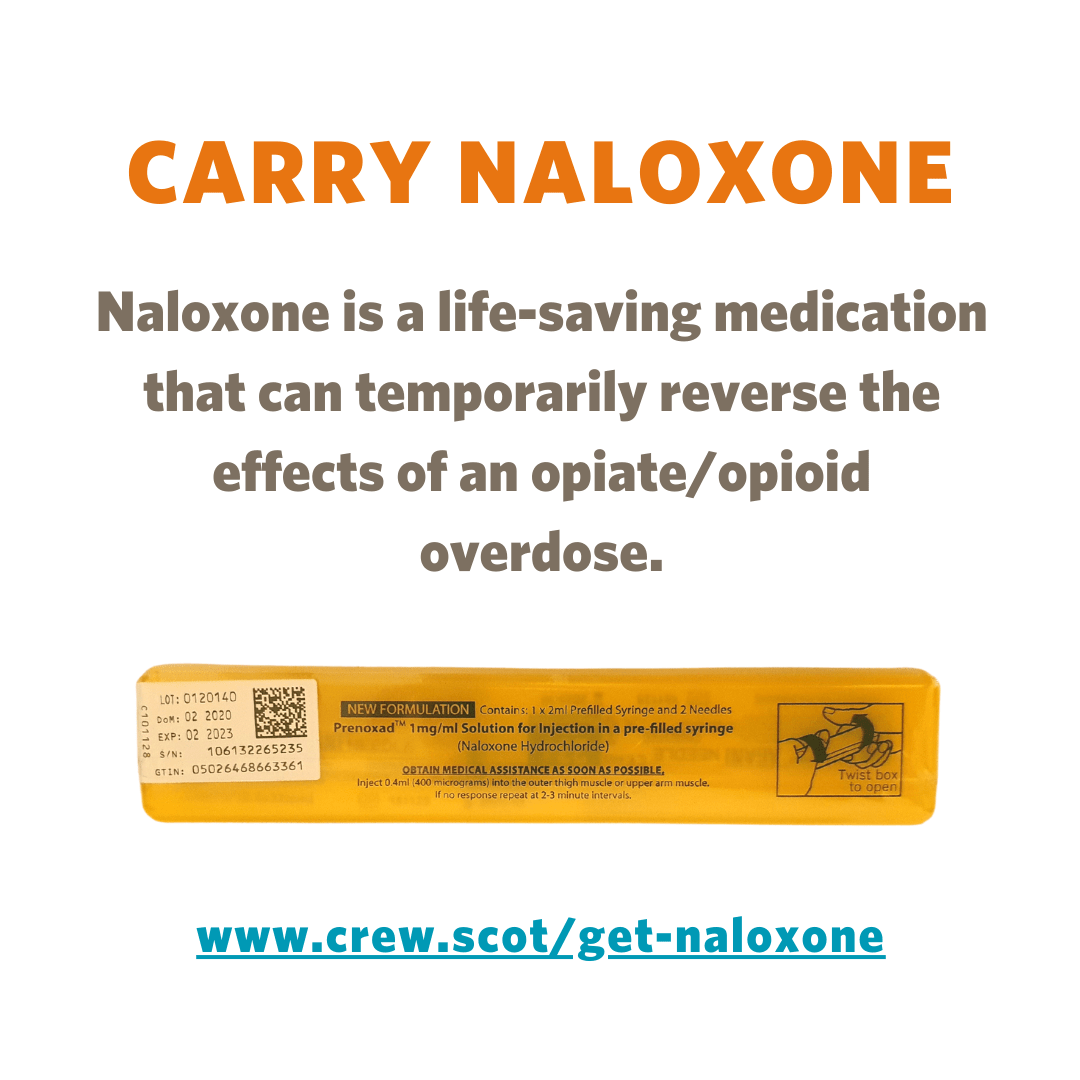 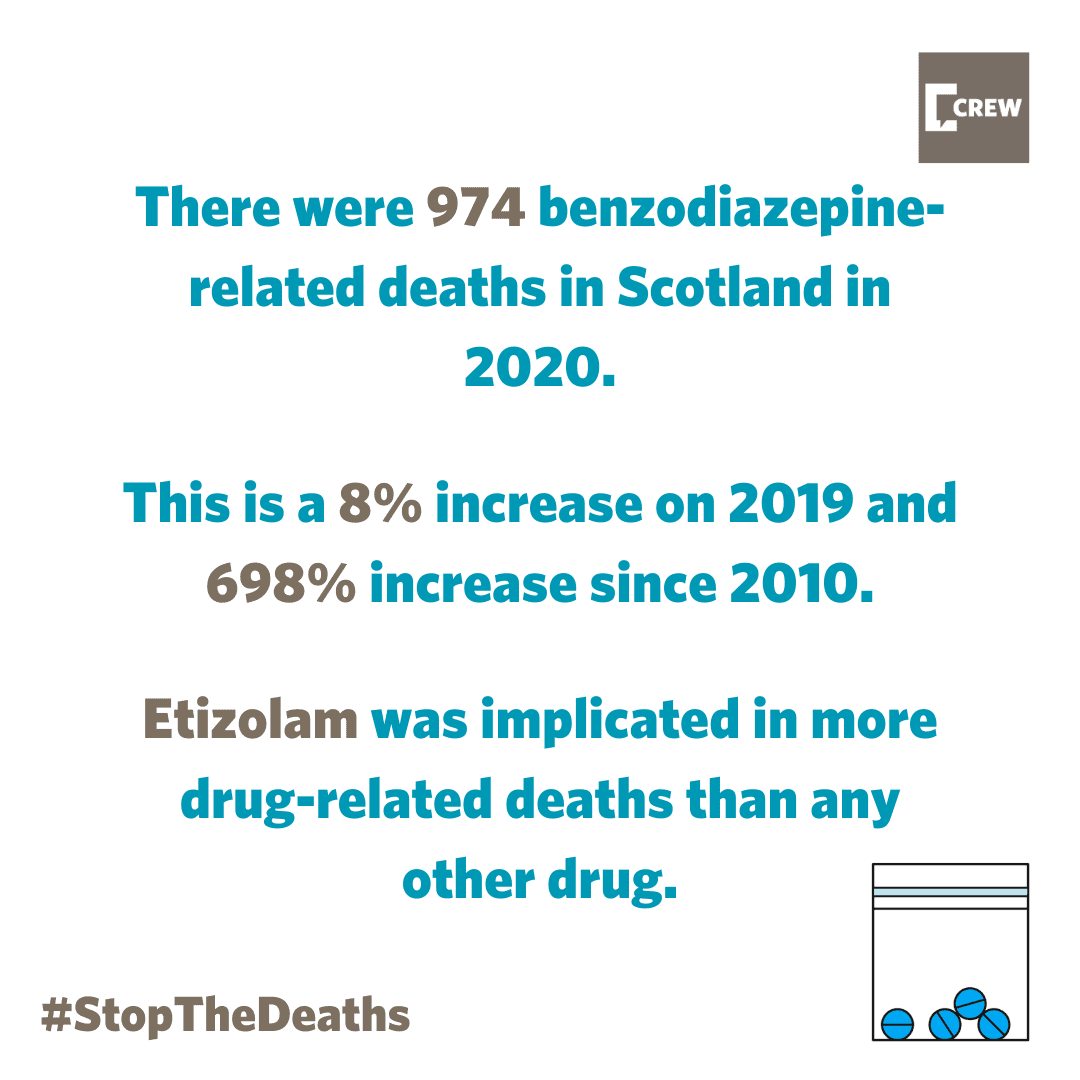 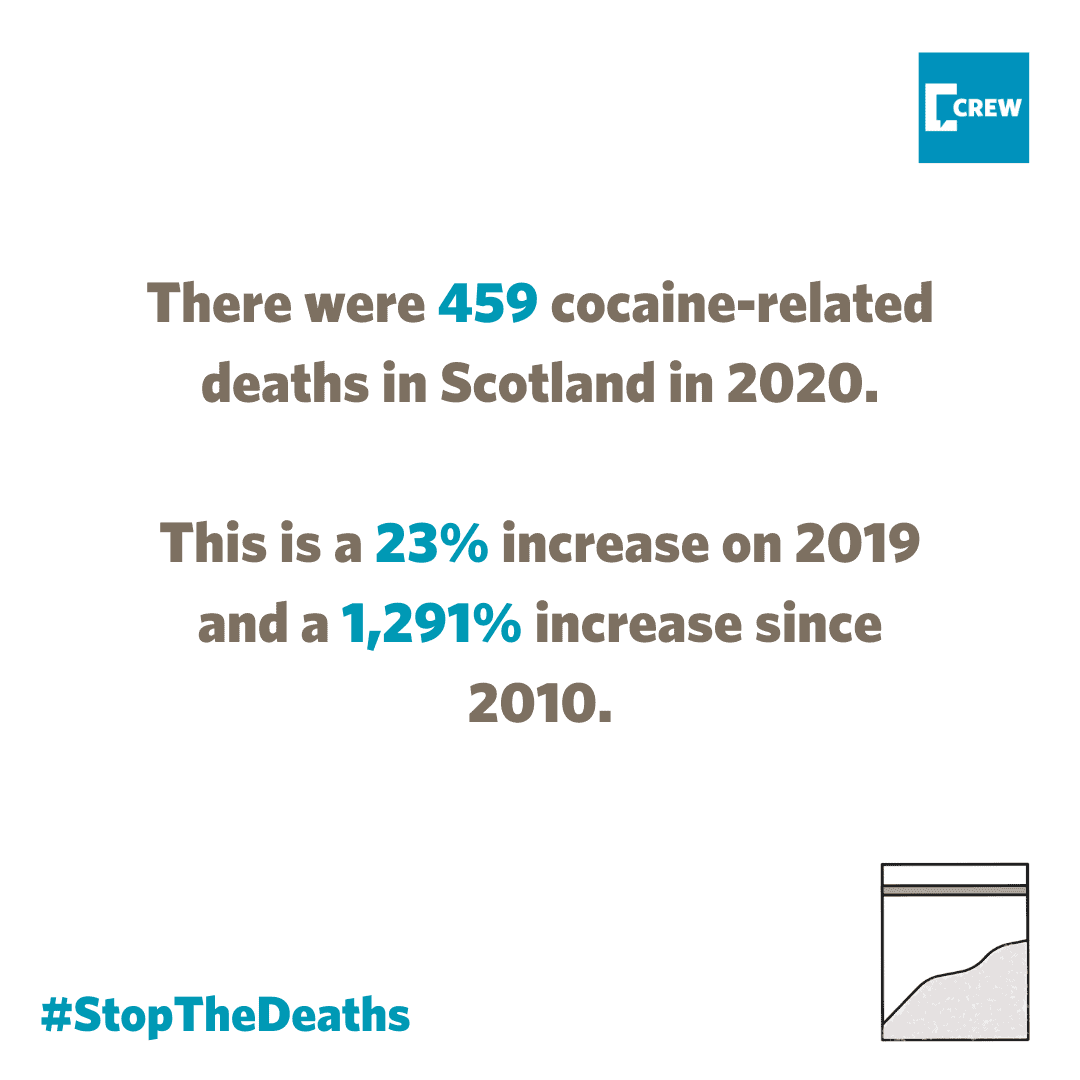 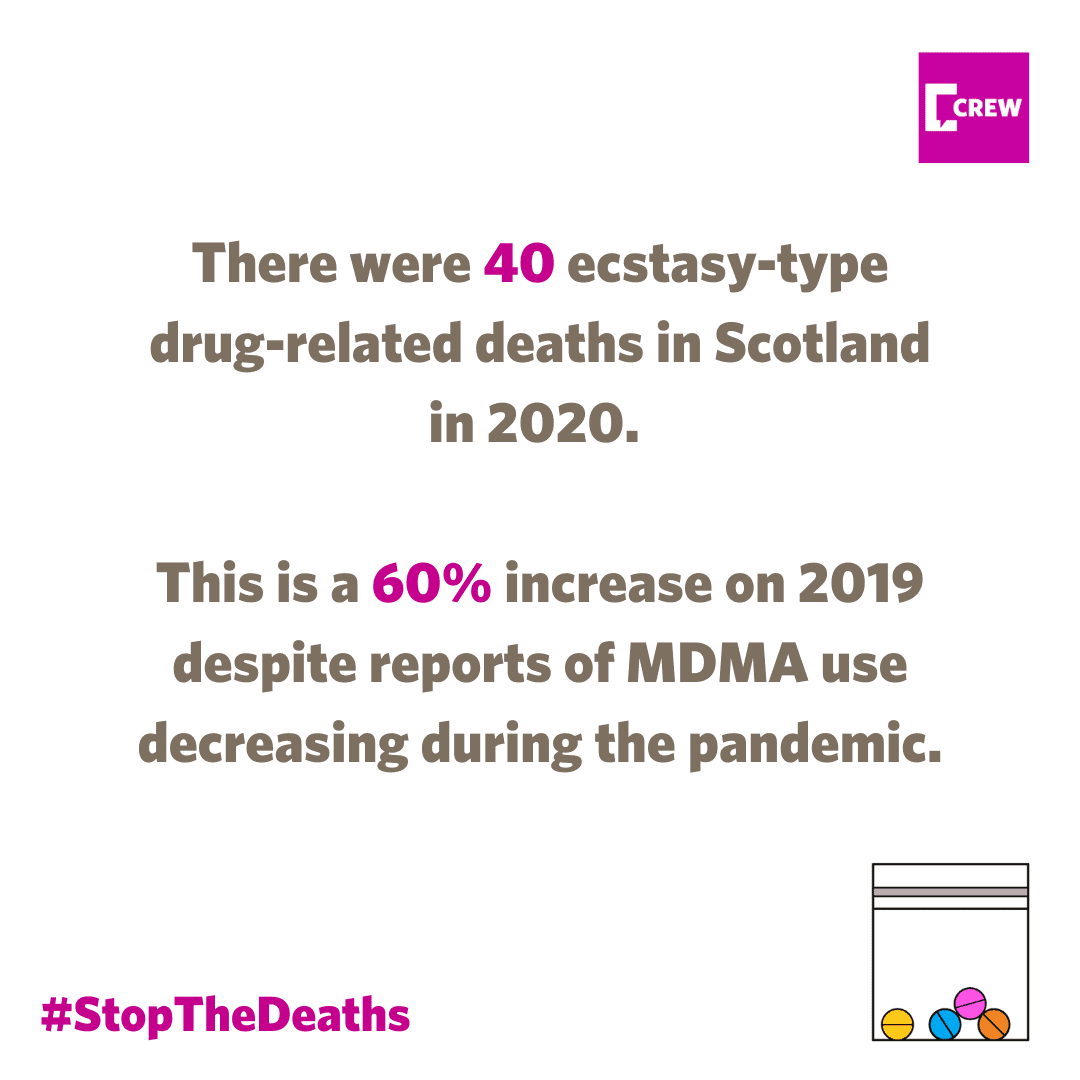